Emotional abuse (also known as psychological abuse) is a terrible thing to go through and can have a lasting impact.  It can cause trauma, stress, low self-esteem, lack of confidence, anxiety, depression and even suicide.  However, emotional abuse is often more subtle and insidious than physical abuse, and as a result people who are experiencing it don’t always realise just how bad things are and that it should stop. 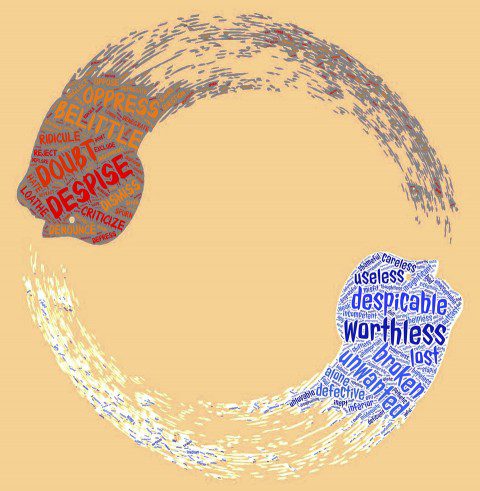 So what does emotional abuse look like? Well, there’s plenty of forms it can take, and I’ve outlined a few here as examples of what it might involve:

Criticism and Bullying: This might include being called derogatory and insulting names or general put downs such as ‘you’re stupid/pathetic/ugly’ etc.  Or it might involve mocking you such as laughing at what you’ve got to say.

Humiliation: Putting you down or making embarrassing comments about you in front of others, exposing your secrets or picking a fight in public.

Shouting and Swearing: I don’t mean the occasional argument here, rather a violent verbal tirade that causes you to walk on eggshells around the person to avoid igniting their anger.

Intimidation and Threats: ‘you’d better be careful’, ‘who knows what I’ll do to you …’ ‘If you leave me, I’ll….’ ‘you’ll never see your kids again if …’  Making you feel frightened of them and genuinely afraid that they might one day carry out their threats.

Demoralising: Making you feel as though your opinion doesn’t matter, pointing out all your flaws and devaluing your achievements.  Dismissing things that you care about as unimportant.

Controlling: Telling you what you can and can’t do, how you should dress, what you can eat, what job you should have etc.  Abusers also often try to control who you see – especially if they think certain people will encourage you to challenge the abusive behaviour. Cutting you off from family and friends is a way to make you feel isolated and that you have no-one to turn to for support.  They may also want to digitally spy on you – putting a tracker on your phone or checking your emails, texts or social media accounts.

Subduing: This could be ordering you about, treating you like a servant, lecturing you or making all the decisions without your input.

Whilst this may be uncomfortable reading, it’s only part of the story as these are only a few of the ways in which emotional abuse might manifest itself and it often continues because the abuser can adopt lots of strategies to make you question yourself as to the seriousness of it all.  For example, they may dismiss what they’ve done as ‘it’s not that bad’, ‘I was only joking’, ‘you’re making such a big deal about this.’ They may even try to blame you for the abuse such as saying that you’ve got issues or that you wind them up and make them angry.  Guilt is another strategy – ‘you don’t appreciate how much I’ve done for you’ or ‘I’m here for you when no-one else is’ as a means of persuading you to stay.  They could even use flat-out denial that they’ve done anything wrong, or even go as far as trying to gaslight you – gaslighting is a term to describe making you question yourself and even cause you to think you’re going mad by imagining things- ‘You’re making this up’, ‘I’ve no idea what you’re talking about.’

There could be various reasons why someone may be hesitant in seeking help or getting out of an emotionally abusive relationship. They may be fearful of recrimination and think they must stay in order to protect themselves or other loved ones.  When they are made to feel worthless, unloved and unwanted their self-esteem can be reduced to such a low level that they can believe that no-one will want to be with them and will end up alone, or that they don’t deserve better treatment or that they’re responsible for it.  Alternatively, they may be convinced that it’s their job to change the abuser.

Then what can you do if you think you’re being subject to emotional abuse? The first thing is to trust yourself – you know when things don’t feel right.  You don’t deserve to be treated this way so resist the lies that keep you feeling trapped.

Secondly, understand that you are not responsible for the abuser’s behaviour and it’s not your job to help them change – How they behave is their choice and it’s up to them to recognise they have a problem and to seek the professional support to change.

Secondly, in order to protect yourself you need to establish strong boundaries – this may be to refuse to accept or respond to the emotional abuse and strictly limit contact with the abuser or get out of the relationship or situation altogether – don’t let them try to sneak back into your life, be decisive and don’t look back or leave a door open for them to return.  You may need to seek legal advice if need be if you’re married to them or have children together.

I do understand that what I’m recommending here isn’t easy and you may need some support to help you do this.  Not only that, but you’ll also need time and space to heal from the damage caused by the abuse, to re-build your self-esteem and confidence. Counselling can make such a big difference, so if you’re reading this and would like to take the first step in seeking help for emotional abuse please get in contact – I’m here whenever you’re ready.